Call me old fashioned, but I still maintain there is a critical difference between climbing out of stupid and climbing into it. 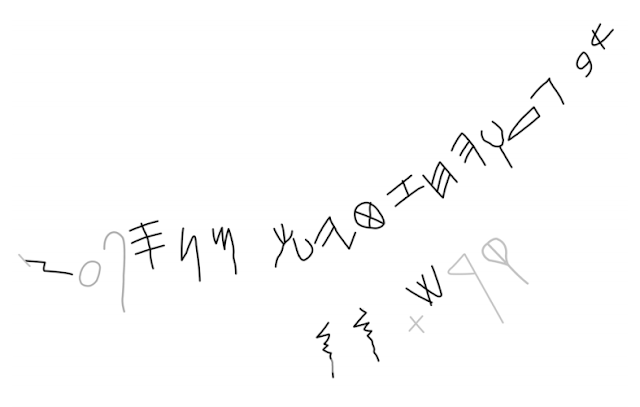 It has been said that Paul includes an early oral tradition about Jesus in his first letter to the Corinthians. Paul reiterates in his letter what he had already told them in person
Paul concludes with his own encounter


Last of all, as to one untimely born, he appeared also to me. For I am the least of the apostles, unworthy to be called an apostle, because I persecuted the church of God.

Paul's encounter is probably his addendum to the prior account. Note also that the parenthetical comment, "most of whom are still alive, though some have fallen asleep," may also be an addition. Some place all of the material from the 500 brothers onward as Paul's addition.

Apparently the combination of paradidomi with paralambano was understood by a the ancients to mean that the speaker is passing on an oral tradition that has been received from others. I am uncertain as to whether there is an implied expectation in these two words for the hearer to also memorise. The earlier use of this phrase by Paul directly to the Corinthians, and then his repetition in the letter seems to suggest so in this instance.

1 Corinthians was authored in the early 50s. However there are apparently clues that this phrase maybe an oral history originating several years earlier. Paul was writing in Greek though he also knew Hebrew and Aramaic*. The saying as recorded in 1 Corinthians has marks of translation from Hebrew/ Aramaic into Greek as it is written. Paul likely had the saying memorised in Hebrew/ Aramaic and translated it to his secretary.

These clues are possibly the use of the Semitic "Cephas" rather than the Greek "Peter", though Paul does use "Cephas" consistently in 1 Corinthians and uses it more than "Peter" in his other letters. And the construction "And that" (kai hoti), which is the Greek translation of the waw consecutive, a Semitic construction.

So recorded in 1 Corinthians is a very early oral tradition about Jesus that antedates all the New Testament documents probably within a few years of the resurrection of Jesus, in the Hebrew/ Aramaic language.


*Many scholars suggest that the language in Judea at the time of Christ was Aramaic, a language from Babylon (and Assyria) closely related to Hebrew. Others claim they spoke Hebrew.
Posted by bethyada Time 08:00 No comments:

The Word became flesh and dwelt among us

The last line being difficult to translate: make the vision plain on the tablets:
more literally
The NET gives the meaning that it is easy to read such that one can run his eyes through the text. Another interpretation is that it is easy enough to read so that someone can read from the tablet even while he is running. One could paraphrase the last line: so that he can read it while he is running. I side with a person running interpretation which is the meaning given in the ESV and NASB. The ancients usually read out loud so the idea is probably that of one proclaiming, that is a herald as per the NIV.


“Write the vision;
make it plain on tablets,
so that he who proclaims it may run.”

This describes a message: the vision; a medium: tablets; and a messenger: the person proclaiming. All information has this: content, a carrier medium, and communication (speaking, reading, etc).

Compare John's introduction to his gospel.

Posted by bethyada Time 15:00 No comments:

Email ThisBlogThis!Share to TwitterShare to FacebookShare to Pinterest
Labels: information

The similarities in content between the letters of Jude and 2 Peter are well known.

Further, some dispute that 1 Peter and 2 Peter were written by the same individual due to differences in vocabulary, grammar, and style.

In his Redating the New Testament Robinson makes an argument that Peter's comment about his departure (2Pe 1:15) references a literal departure from a region rather than his impending death. He also notes that Jude takes off from writing another letter to mention other urgent issues (Jud 1:3). Further 2 Peter makes mention of an earlier letter. Johnson argues that if Jude was Peter's agent in writing the letter of 2 Peter then the "I" of 2 Peter 3:1 refers to Jude and not Peter; and the letter Jude left off to write the Epistle of Jude was the letter he was writing for Peter. Consequently he dates both Jude and 2 Peter early and makes 2 Peter antedate 1 Peter!

I think the reconstruction by Robinson is faulty. The ESV translates Jude 1:3 thus,


Beloved, although I was very eager to write to you about our common salvation, I found it necessary to write appealing to you to contend for the faith that was once for all delivered to the saints.

This does not require leaving off another actual letter, rather that the circumstances require that Jude's original topic needs to be deferred by reason of more urgent matters.


Therefore I intend always to remind you of these qualities, though you know them and are established in the truth that you have. I think it right, as long as I am in this body, to stir you up by way of reminder, since I know that the putting off of my body will be soon, as our Lord Jesus Christ made clear to me. And I will make every effort so that after my departure you may be able at any time to recall these things. (2Pe 1:12-15)

But if the similarity of style between Jude and 2 Peter remains strong this could have authorship implications. There is clearly similarity of topic such that 2 Peter is dependent on Jude or vice versa (or both dependent on a common source). But there are enough differences to suggest borrowing of concepts rather than a quotation. If the same author wrote both Jude and 2 Peter this would both explain the similarity and allow for the variation of a person writing about the same topic on different occasions.

Assuming this solution, which was written first? It seems to me that the better style would reflect the later version and I will need to defer to Greek readers as to whether Jude or 2 Peter is more polished (at least in the parts of the letters that overlap). If, however, Jude was writing 2 Peter very near the end of Peter's life, were Jude to write a second letter to another church in the months following Peter's martyrdom to warn of the same dangers, he would write in his own name.

Interestingly, Jude is thought to be less likely to be pseudonymous than 2 Peter because why would an anonymous author attach the name "Jude" of all options? Only Jude would use Jude. However, if Jude also wrote 2 Peter as an amanuensis it would increase the authenticity of 2 Peter as Jude had no reason to attach Peter's name unless Peter were the author. Were Jude to falsely add Peter's name to 2 Peter then why would he write a different letter in his own name?

If we accept that Jude was the amanuensis for 2 Peter then he subsequently wrote his letter after Peter's death, then 2 Peter and Jude would be written c. 64†.

*This is dispute concerning when James was put to death. It may have been as early as 62.
†Peter was put to death during Nero's reign 54–68. Exact date is uncertain but c. 64–67.
Posted by bethyada Time 08:00 No comments:

Kings of the divided kingdom

The southern kingdom is referred to as Judah and it included the tribe of Benjamin and some of Levi. Through the book of Chronicles it is often referred to as Israel.

The northern kingdom incorporated the other tribes and was referred to as Israel or Ephraim after the largest tribe. Ephraim is a half tribe of Joseph.


The list above does note correspond chronologically between Judah and Israel.

Judah had 19 kings. They were all sons or relatives of the previous king. Athaliah the queen mother usurped the throne and declared herself queen.

Israel had 20 (or 19) kings. There were several different dynasties. Note that Tibni and Omri ruled different regions of Israel until Omri defeated Tibni.

Liberty is the right to choose. Freedom is the result of the right choice.


Let us begin with “the big three.” Calvinistic apologist, Dr. James White, refers to Ephesians 1, Romans 9 and John 6 as the “classicus locus,” in an article seeking to defend the TULIP systematic. I contend that if any one of these passages did not exist in the canon of scripture that Calvinism would have never even existed.

Of these 3 passages, 2 are by Paul. John’s dialogue is not obviously Calvinist.

The grand theme of both Romans and Ephesians is that the Gentiles are included God’s salvation plans. The kingdom is not restricted to the Jews, it is for everyone. This is the revealed mystery in the last days (Eph 3:6).

But note the irony. Calvinists take a few verses from these books, books about how the kingdom is so much more inclusive and expansive than the Jews ever imagined, and they teach that salvation is restricted to the few that God selectively chooses.
Posted by bethyada Time 08:00 No comments:

Email ThisBlogThis!Share to TwitterShare to FacebookShare to Pinterest
Labels: determinism

The usual character of human testimony is substantial truth under circumstantial variety.