Was Jesus born in a house or a stable? 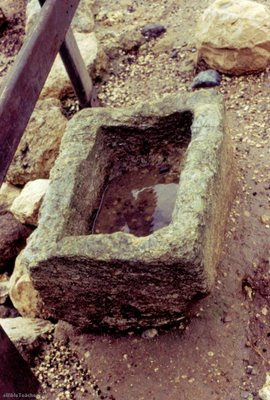 Kenneth Bailey wrote an article in 1979 titled, "The Manger and the Inn". Near the beginning of the article he writes,

For centuries, large sections of the Church have assumed that the manger was in an animal stable. Three overlapping questions arise here, which of necessity must be discussed together: 1. Was the birthplace a cave? 2. Was it a stable or a private home? 3. Was it inside or outside the village? I will try to demonstrate that the place was likely a private home in the village, and may have been a cave.

I was somewhat doubtful of the claim that Jesus was born in a house, after all, the passage says:

And she gave birth to her firstborn son and wrapped him in swaddling cloths and laid him in a manger, because there was no place for them in the inn. (Luke 2)

But the article was most interesting and convinced me otherwise. First, Bailey shows that mangers were present in houses in Palestine,

What then of the manger? The text tells us, “She gave birth to her first son, wrapped him in swaddling clothes and laid him in a manger.” The traditional understanding of this verse in the Western world moves along the following path. Jesus was laid in a manger. Mangers are naturally found in animal stables. Ergo, Jesus was born in a stable. However, in the one-room peasant homes of Palestine and Lebanon, the manger is built into the floor of the house. The standard one-room village home consists of a living area for the family (Arabic mastaba), mangers built into the floor for feeding the animals (mostly at night), and a small area approximately four feet lower than the living area into which the family cow or donkey is brought at night (Arabic ka’al-bayt)

But what is most interesting is that he goes on to mention that the word translated "inn" (kataluma) can also be translated as "guest room". In fact, it is translated "guest room" elsewhere in the New Testament,

And the mention of the word "inn" in the parable of the Good Samaritan (Luke 10) is a different word.

He went to him and bound up his wounds, pouring on oil and wine. Then he set him on his own animal and brought him to an inn (pandocheion) and took care of him. (Luke 10)

This is not saying that kataluma does not ever mean inn, though some have argued thus. However note that it is the same author who relates the both the parable of the Good Samaritan and the lack of lodging at the nativity, suggesting that had Luke meant "inn" in the nativity story it is more likely he would have used the word "pandocheion".  The suggestion then is that the house in Bethlehem had a guest room which was otherwise full and so Joseph and Mary stayed in the main room. Bailey writes,

This translation gives new understanding to the story of Jesus’ birth. Joseph and Mary arrive in Bethlehem. They find shelter with a family whose separate guest room is full, and are accommodated among the family in acceptable village style. The birth takes place there on the raised terrace of the family home, and the baby is laid in a manger.