It seems to residents that the country has not being getting warmer over the last decade. Such that advocates of global warming prefer the term climate change so that any weather anomaly can be attributed to anthropomorphic global warming. And people are willing to parrot claims that some parts of the world will get colder (this may be a prediction of the theory but should encourage one to cautiously consider these claims).

The New Zealand National Institute of Atmosphere and Water Research (NIWA) do not show significant change since 2000 but they do show an increase over the last century as seen in this graph.

Yesterday the New Zealand Climate Science Coalition released an article challenging this rise using NIWA's own data. They plotted the temperatures from the NIWA source data and got this graph. 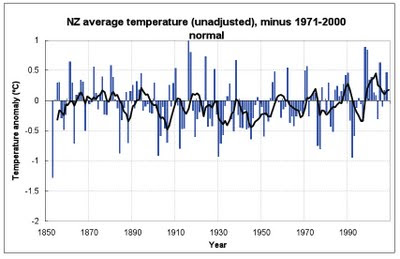 Whereas the first shows a rise of ~1°C per century, the second shows no discernable rise. The difference between the 2 graphs? The second uses raw data, the first (probably) has adjusted the data.

About half the adjustments actually created a warming trend where none existed; the other half greatly exaggerated existing warming.

There are legitimate reasons why data can and should be adjusted. Cities grow and hence warm so later temperatures may be warmer, especially overnight. Different thermometers may be used that show a consistent measurable difference. But there are 2 comments to make about adjusting data. Firstly adjusted data should be labelled as such with the unadjusted data displayed alongside it and the factors the data was adjusted for.

Secondly, it makes a difference whether adjusting data removes or produces an association. Frequently differences in data are seen because they attributes of the data sets are different. If we compare test scores between highschools to create a league table it may be reasonable to correct for number of children in different grades as some schools may have more students at higher levels, or one school may only let its brightest children sit the test. But we should be more cautious about accepting an association that only appears after adjustment. It is not that there can be no difference, rather it is that enough statistical manipulation can show a difference and the reasons for the adjusted variables are then argued after the fact.

If you do find a difference after adjustment you need to check your adjustment factors are not associated with the variable that is under consideration, in this case you cannot adjust for time as time changes are what is being looked for; and you must validate your adjustment with an independent data set.

On top of the release of emails and computer code from the now infamous Climate Research Unit at the University of East Anglia, UK; perhaps there might be some room for debate around the issues of climate change. Is it happening? Are humans responsible? Would it be detrimental? Should we pay attention to scientists who refuse to reveal their data and formulae?
Posted by bethyada Time 23:00