Establishing the model before doing the maths

My recent post on information led to a call for a precise definition of what is meant by information. This request is eminently reasonable. I have yet to give an exact mathematical definition, or even an exact philosophical one. The reason is that "information" has a variety of meanings to different people; and the association with computing and information technology colours people's thinking.

Consider gravity. My understanding is that ideas about gravity around the time of Bacon, Galileo, Kepler, and Newton changed the way people thought about motion. Prior to then it was obvious that objects fell to the ground, but the Aristotelian rationale for such motion was that (some) objects tend toward the centre of the earth. And observations would support this claim. Post-Aristotelian physics described the same phenomena, but for a different reason: massive objects attract each other. The stone moves toward the earth, and the earth moves toward the stone; but the earth imperceptibly because of its immense size. Same observation (as much as perceptible) but different explanation. 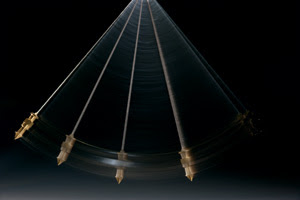 The old theorem explains pendulums better. Pendulums tend to the centre of the earth so they stop after a time, not doing so immediately because the weight is moving when it gets to the lowest point. Newton's theory needs friction to explain the same observation; one could argue Newton is less parsimonious. However Newton was shown correct over time. And his theory was well defined, gave predictions, and was generalisable to the heavens.

My diversion was to highlight that the differences between the two approaches did not require them to be rigorously defined. The mass-attraction concepts antedated the maths by a significant amount of time; Newton had to invent maths for his theory! But a philosophical discussion on the merits of objects tending to the centre of the earth versus objects attracting is still very possible.

Similarly, it is possible to discuss other topics in general before rigour is attained, including information.

Information is a non-material concept that contains instructions thru language.

I use the term instruction somewhat broadly including being informed, not just commanded. That is, meaning of some form exists.
Posted by bethyada Time 13:00