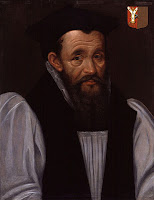 Richard Bancroft, bishop of London (later Archbishop of Canterbury), set out fifteen principles for the translators of the King James Version of the Bible:

Rules to Be Observed in the Translation of the Bible

1. The ordinary Bible read in the Church, commonly called the Bishops Bible, to be followed, and as little altered as the Truth of the original will permit.

2. The names of the Prophets, and the Holy Writers, with the other Names of the Text, to be retained, as nigh as may be, accordingly as they were vulgarly used.

3. The Old Ecclesiastical Words to be kept, viz. the Word Church not to be translated Congregation.

4. When a Word hath divers Significations, that to be kept which hath been most commonly used by the most of the Ancient Fathers, being agreeable to the Propriety of the Place, and the Analogy of the Faith.

5. The Division of the Chapters to be altered, either not at all, or as little as may be, if Necessity so require.

6. No Marginal Notes at all to be affixed, but only for the explanation of the Hebrew or Greek Words, which cannot without some circumlocution, so briefly and fitly be expressed in the Text.

7. Such Quotations of Places to be marginally set down as shall serve for the fit Reference of one Scripture to another.

8. Every particular Man of each Company, to take the same Chapter or Chapters, and having translated or amended them severally by himself, where he thinketh good, all to meet together, confer what they have done, and agree for their Parts what shall stand.

9. As any one Company hath dispatched any one Book in this Manner they shall send it to the rest, to be considered of seriously and judiciously, for His Majesty is very careful in this Point.

10. If any Company, upon the Review of the Book so sent, doubt or differ upon any Place, to send them Word thereof; note the Place, and withal send the Reasons, to which if they consent not, the Difference to be compounded at the general Meeting, which is to be of the chief Persons of each Company, at the end of the Work.

11. When any Place of special Obscurity is doubted of, Letters to be directed by Authority, to send to any Learned Man in the Land, for his Judgement of such a Place.

12. Letters to be sent from every Bishop to the rest of his Clergy, admonishing them of this Translation in hand; and to move and charge as many skilful in the Tongues; and having taken pains in that kind, to send his particular Observations to the Company, either at Westminster, Cambridge, or Oxford.

13. The Directors in each Company, to be the Deans of Westminster, and Chester for that Place; and the King's Professors in the Hebrew or Greek in either University.

14. These translations to be used when they agree better with the Text than the Bishops Bible: Tyndale's, Matthew's, Coverdale's, Whitchurch's, Geneva.

15. Besides the said Directors before mentioned, three or four of the most Ancient and Grave Divines, in either of the Universities, not employed in Translating, to be assigned by the vice-Chancellor, upon Conference with the rest of the Heads, to be Overseers of the Translations as well Hebrew as Greek, for the better observation of the 4th Rule above specified.
Posted by bethyada Time 22:00