Writing on a potsherd found over a year ago in Qeiyafa near the Elah valley has been deciphered by Professor Gershon Galil of the University of Haifa. It is said to be the oldest known extant inscription in the Hebrew language. The potsherd was radiocarbon dated to c. 1000 BC which is around the time of King David. Interestingly Elah Valley (if it has been identified correctly) is the location of the famous fight between David and Goliath. I take the radiodate with a degree of scepticism; while useful, radiodates need to be calibrated to artifacts of known dates due to the problems around the amount of carbon 14 in the atmosphere versus biosphere and the variable rate of production. 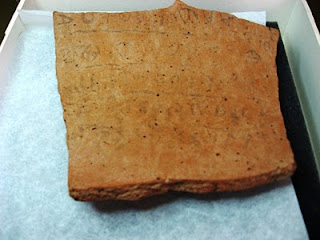 The Qeiyafa inscription used what was described as a proto-Canaanite (variant paleo-Hebrew) script, but as that was also used for other languages the fact it was Hebrew awaited translation.


Prof. Galil's deciphering of the ancient writing testifies to its being Hebrew, based on the use of verbs particular to the Hebrew language, and content specific to Hebrew culture and not adopted by any other cultures in the region. "This text is a social statement, relating to slaves, widows and orphans. It uses verbs that were characteristic of Hebrew, such as asah ("did") and avad ("worked"), which were rarely used in other regional languages. Particular words that appear in the text, such as almanah ("widow") are specific to Hebrew and are written differently in other local languages. 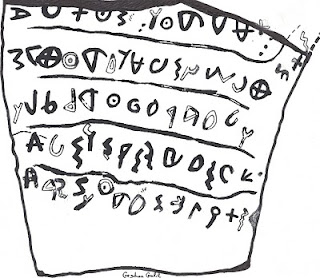