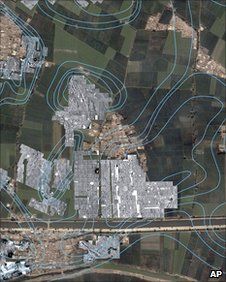 An article from a few months ago mentioned that radar may have identified streets from the ancient city of Avaris. It's location was previously known but recent imaging has revealed more detail


The radar images show the outlines of streets and houses underneath the green farm fields and modern towns in Egypt's Delta.

Egyptian antiquities chief Zahi Hawass said in a statement that the area could be part of Avaris, the summer capital of the Hyksos....

The Hyksos are identified with the Second Intermediate Kingdom in the current conventional secular chronology. Comments from Manetho and Josephus (who quoted Manetho) may suggest how the Hyksos fit into a a biblical chronology.


Now this Manetho, in the second book of his Egyptian History, writes... "there came, after a surprising manner, men of ignoble birth out of the eastern parts, and had boldness enough to make an expedition into our country, and with ease subdued it by force, yet without our hazarding a battle with them. So when they had gotten those that governed us under their power, they afterwards burnt down our cities, and demolished the temples of the gods, and used all the inhabitants after a most barbarous manner; nay, some they slew, and led their children and their wives into slavery. At length they made one of themselves king, whose name was Salatis; he also lived at Memphis, and made both the upper and lower regions pay tribute, and left garrisons in places that were the most proper for them. He chiefly aimed to secure the eastern parts, as foreseeing that the Assyrians, who had then the greatest power, would be desirous of that kingdom, and invade them; and as he found in the Saite Nomos, a city very proper for this purpose, and which lay upon the Bubastic channel, but with regard to a certain theologic notion was called Avaris, this he rebuilt, and made very strong by the walls he built about it, and by a most numerous garrison of 240000 armed men whom he put into it to keep it. Salatis came there in summer time, partly to gather his corn, and pay his soldiers their wages, and partly to exercise his armed men, and thereby to terrify foreigners....

This whole nation was styled 'Hyksos', that is, Shepherd-kings: for the first syllable 'Hyk', according to the sacred dialect, denotes a king, as is 'Sos' a shepherd; but this according to the ordinary dialect; and of these is compounded Hyksos: but some say that these people were Arabians." Now in another copy it is said that this word does not denote Kings, but, on the contrary, denotes Captive Shepherds, and this on account of the particle "Hyk"; for that "Hyk", with the aspiration, in the Egyptian tongue again denotes Shepherds, and that expressly also; and this to me seems the more probable opinion, and more agreeable to ancient history. "These people, whom we have before named kings, and called shepherds also, and their descendants," as he says, "kept possession of Egypt 511 years." After these, he says, "That the kings of Thebais and the other parts of Egypt made an insurrection against the shepherds, and that there a terrible and long war was made between them." (Flavius Josephus, Against Apion, Book 1;14)

This would be consistent with an tribe invading a nation without an army. Velikovsky followed by Courville and Down suggest this occurred following the exodus of the Hebrews from Egypt. This would place the events about ~1400 BC. They identity the Hyksos with the Amalekites who had previously fought Israel at Rephidim (Exodus 16).

Of minor significance we also note that the duration of Hyksos rule in Egypt is commonly apportioned ~150 years in secular chronologies whereas Scripture has Saul fighting the Amalekites 400 years after the Exodus (1 Samuel 15), more in keeping with Manetho's figure of 511 years. It must be mentioned that Manetho is somewhat unreliable with chronology. Also, it is not clear whether Saul's battle included Egyptian based tribes; the battle extended to Shur east of Egypt.
Posted by bethyada Time 13:00