The deity of Christ in John


In the beginning, God created the heavens and the earth. (Genesis 1:1)

John introduces his gospel in a similar manner

The Greek in John uses the same initial two words as the Septuagint.
This allusion testifies to the divinity of Jesus. Beyond the connection of the "Word" with "God" in John, John links God as creator in Genesis with the Word as creator in his gospel. Genesis states that God is creator of the heavens and the earth, a merism for everything,

John tells us that the all things were made through the Word, and he emphasises this with the negative: there was nothing made without the Word, 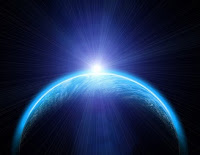 The first thing created within the new cosmos was light,

Still alluding to Genesis John informs us that just as light came into the world, the Word is light to mankind.


In him was life, and the life was the light of men. The light shines in the darkness, and the darkness has not overcome it. (John 1:1-5)

John's use of Genesis makes it clear that the God who created the world is the Word.
Posted by bethyada Time 14:00