Papyrus of Turin to be modified

In c. 1820–1822 Italian Bernardino Drovetti discovered a papyrus in the ancient Egyptian city of Thebes which contained a list of Egyptian kings on the reverse side. It lists them thru to about the 17th of 20th dynasty of Egypt which suggests that it may date from this period. It is unknown who the author was nor the source for the data recorded on the papyrus. The Turin Papyrus is written in hieratic, a script related to hieroglyphic.

Unfortunately it was transported to a Museum of Egyptology at Turin, Italy with inadequate care so it was unpacked in tiny pieces, many of which were lost. Reconstruction was attempted by Jean-François Champollion then Gustavus Seyffarth. Although this reconstruction was incomplete and possibly inaccurate in places.

Earlier this year visitors from the British Museum, Richard Parkinson and Bridget Leach, asked about the missing fragments. (Original source.)

After hours of discussion was Elvira D'Amicone, Egyptology from the ministry, who had the right intuition: if the papyrus fragments had come to the museum, the missing parts should not be too far away. Maybe we should look for them in the basement, in that mysterious warehouse that holds enough artifacts to set up another museum, the day that there will be money to deal with seriously. And indeed they were there, forgotten for over half a century in a closet: a compassionate hand had even included some of the two plates of glass, because it preserved without damage.

They found the lost fragments in the basement. And now the papyrus has been shifted to the British museum (as far as I can tell from the translation) for reconstruction. 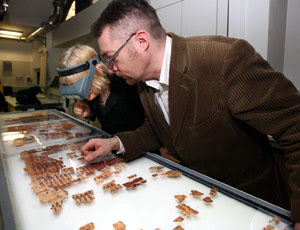 This could lead to some interesting modifications to the received Egyptian chronology. I do not accept the current secular proposals for the various Egyptian pharaohs. And I think too much weight is given to Manetho. The Turin Papyrus may challenge both Manetho and modern reconstructions.

The Turin Papyrus does not appear to be written for a specific king, thus may be less likely to modify the data to be favourable to any ruler. It also includes material on the Hyksos who were not well liked by the Egyptians. Therefore there is some reason to consider it somewhat reliable. Nevertheless the author is reliant on the accuracy of his source material, and there is the general tendency for ancient writers to suggest greater antiquity of their nations over others.
Posted by bethyada Time 20:00